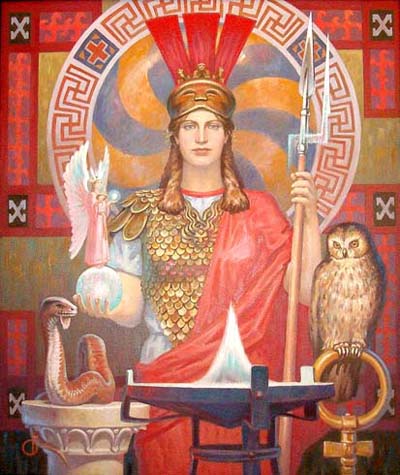 When we speak about Native Gods we mean our Primordial, Heathen, Indo-Arian, Ancient-European and Old-Slavic Pantheon. It has its own history, described in many ways in different schools. There are hundreds of traditions to interpret, to present and to glorify our Pagan Gods.

My method is based on the Ancient Russian tradition, started with the archaic religions and continued with modern art and cults. I speak as a follower of the Native Faith (Rodnaya Vera) that has Heathen roots and a researcher of the Slavonic History (Slavist) as well as a collector and a publisher of Traditional European Art. 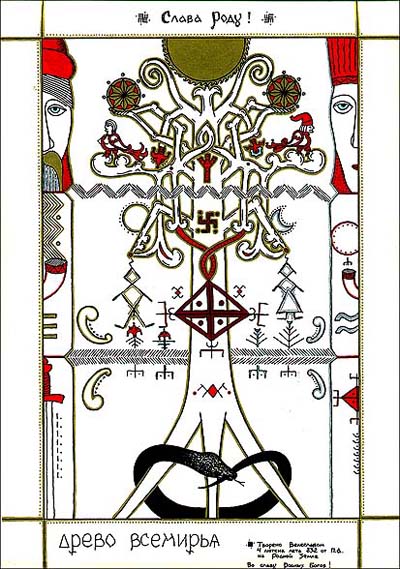 “The Tree of Life” by Veleslav

The Native Gods’ Pantheon is many thousands years old. His roots have been growing from antediluvian era, from Paleolithic times and matriarchy society. It is not easy to study this Primordial Tradition as whole, to see genetic and linguistic links, to avoid subjectivism, localism and personal fantasies. For example, so called Western Science likes to speak about Indo-European tradition, but generally surveys Celtic, Germanic and Indian heritage. The Balto-Slavic, Scythian or Russian antiquities are not well-known in the West. This ideological mistake is not acceptable for the modern Europe that unites Western and Eastern parts of the continent. 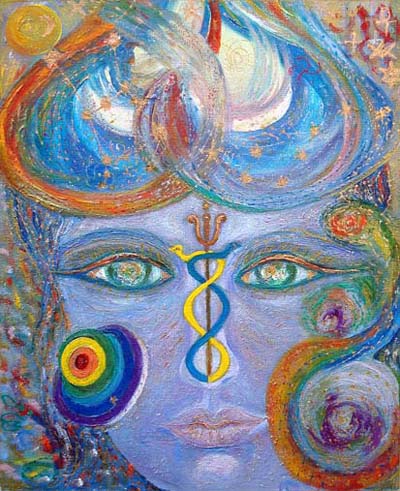 The oldest period of the Russian Primordial tradition is connected with the Hyperborean civilization that took place on the Arctida (Arctic continent) many thousands year ago. In the Nothern part of Eurasia are found the rests of pre-historian cites and temples, like Arkaim or Arctic islands. Some sacred Indo-Aryan texts as VEDA confirm the history of migrations of Arians from the North to the South. Many of local toponims, especially river names from northern Russia, have parallels in VEDA. The Primordial Hyperborean tradition is reflected in the common Indo-European mythology, very well known in the academic world. 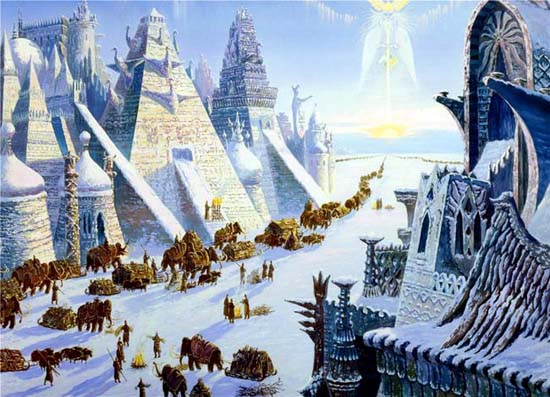 “Out coming from Hiperborea” by Vsevolod Ivanov

Old Slavic and Russian Art represents a rich variety of traditional Indo-European myths, such as The Tree of Heaven with Paradise’ birds (Arbor Mundi), The Archaic Goddess figures as Mother-Land and Rojanitsa (Mater Matuta), Dajdbog (the god of the Sun, like Appolo), Rod (God-Father) and Perun (the God of power and thunder) Idols. Their images come from pre-Christian times and live until modern times in our folklore. 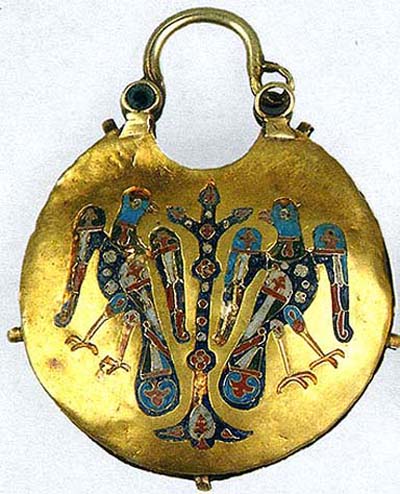 “The Tree of Heaven” (golden earings)

The world famous Russian souvenir Matrioshka is an archaic symbol of Mater Matuta. Another example is the Palech art-school, that likes to reproduce the symbolic Firebird on miniature varnish boxes. 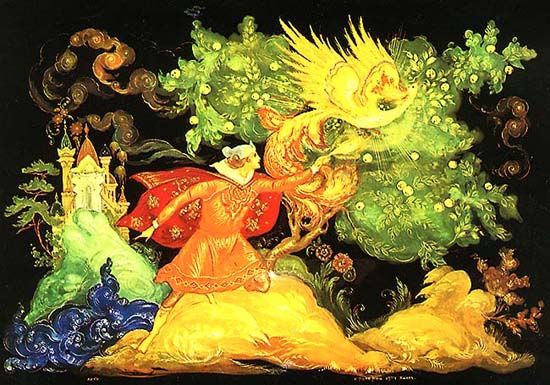 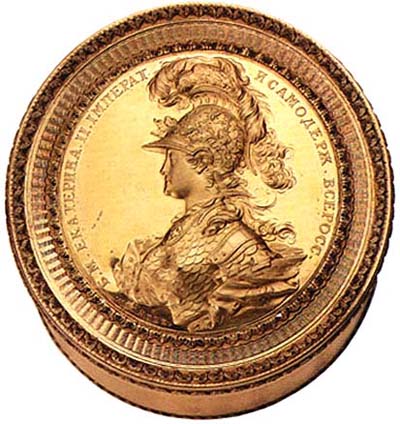 Catherine the Great as Minerva,
the Goddess of Wisdom

The invincible Generalissimos Alexander Suvorov has been represented as Mars (Ares), the God of War, in one of his memorial statues. In the XVIII century appear first illustrated encyclopedias, devoted to the Slavic Pagan Pantheon. 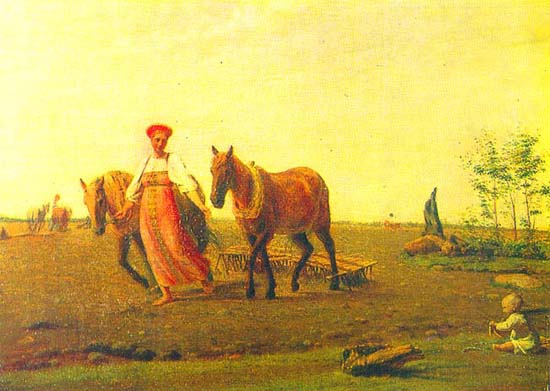 “The Spring” by Alexey Venetsianov

The XIX century is known as a Golden Age of Russian aristocratic culture. It started with romantic pictures of Alexey Venetsianov (“The Spring”) , who is like Botticelli in his style. Continued with Victor Vasnetsov’s mythological realism (“The Magus” after Pushkin’s poem “Oleg the Prophetic”) and the modernist illustrations for Russian Fairy-Tales by Ivan Bilibin (“Baba Yaga flying”, “Gorynich the Dragon”, “Volga having turned into a pike”). 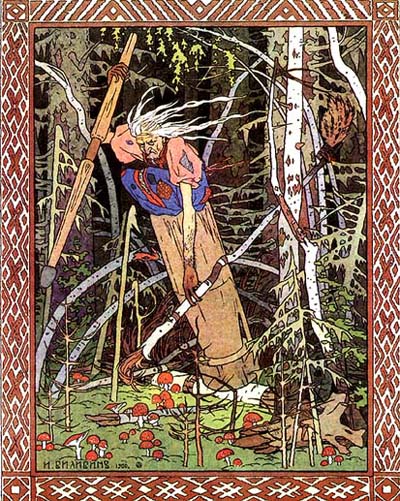 And finished with Michael Vrubel (“The Swan Princess”, “Pan”) was the painter who expressed completely new perspectives of the National Pagan art-school, influenced by French impressionism. 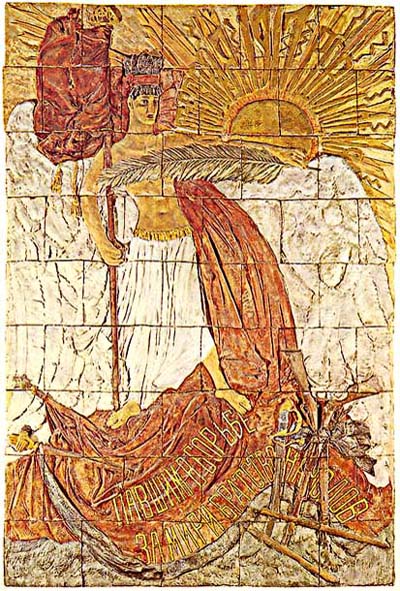 “The Revolution” by Sergei Konyonkov

The dramatic century of Wars and Revolutions has brought social catastrophe for the Russian Empire. But it was productive in Art spheres.

Nicolai Roerich (“The Holy Spring”,, “Idols” etc.), the head of the mystical school of the modern Russian art, has intended to unite Oriental religious knowledge, especially Buddhism, with Occidental expressionism and Masonic doctrines, developed by his wife Elena. Roerich

“The Holy Spring” by Nicolai Roerich

The Soviet Art, based on the ideas of the Proletarian ideology and aesthetics, has not avoided the charms of archaic symbolism. Sergei Konyonkov, a slavonic Rodin in sculpture, represents the Socialist Revolution as “Aurora, the goddess of Dawn”.

And another famous soviet sculpture Vera Muhina, unexpectedly creates the monument of “Boreas, the Northern Wind”. The Primordial Hyperborean tradition is back in the social art format. 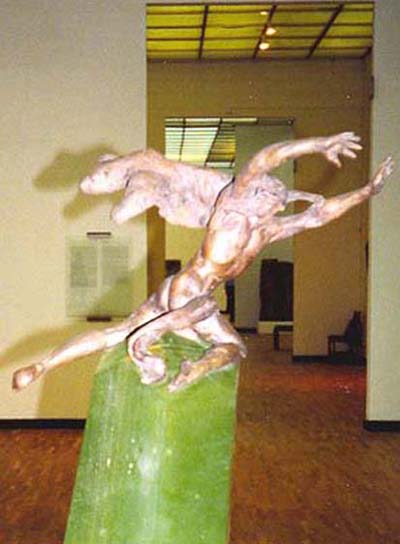 The so called Stalin’s Impire style is influenced by classical roman architecture. But ancient Gods are replaced by human beings, by communist Heroes. Unfortunatley the Post-war soviet artists didn’t know new pagan works, made by Slavic geniuses abroad, such as Stanislaw Jakubovski or Alphonse Mucha. 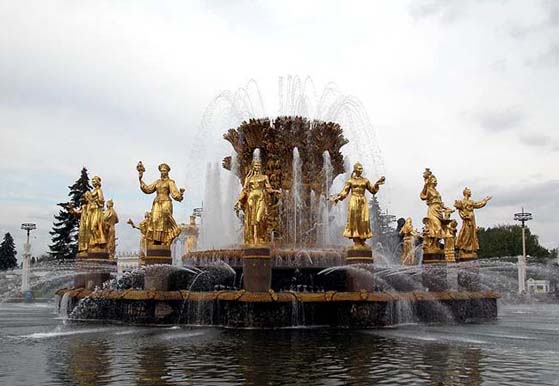 Anticommunist conservative movement in the USSR had mostly Orthodox roots. Only few Russian enthusiasts (Konstantin Vasiliev, Andrey Klimenko, Boris Olshansky, Victor Korolkov, Vsevolod Ivanov) have devoted his life to the study of the Slavic antiquity and the reconstruction of our pre-Christian Pantheon.

Konstantin Vasiliev, is the very famous from this post-war generation. His cold Nordic style, based on in the best traditions of the Third Rich aesthetics (“Sventovid”, “Odin”, “The Gift of Svyatogor”, “The Valkyrie over a fallen Warrior”) made him well known over the White World. 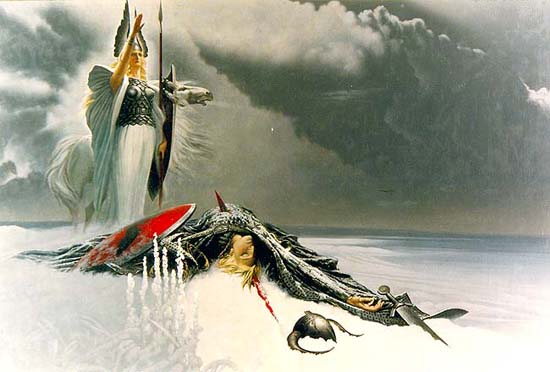 “The Valkyrie over a fallen Warrior” by Konstantin Vasiliev

Here we come to the personal page of my own history. My serious studies of the Slavic culture and Mythology, based on the philosophic, linguistic and semiotic Moscow school, brought me to the Native Faith. This way I has become the follower and one of the ideologists of this religious movement in the post-communist Russia. I took part in some conferences of the WCER and has organized with adherents the Regional Slavic analogue of it – Rodovoye Slavjanskoye Veche. It is a separate story for another report. You can see more details about it at: https://ateney.ru/rodoved/indexrus.htm 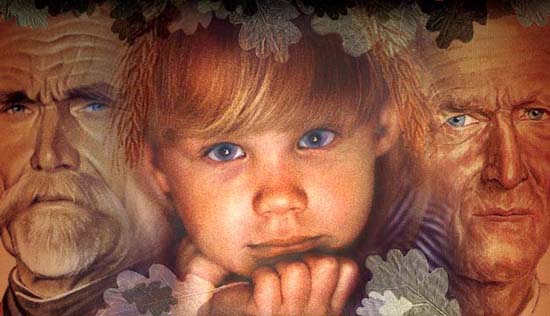 “Think of your future” by Orey

Please, let me represent the very important result of my scientists and religious researches in Pagan Faith. This is an album of art works and encyclopedia “The Native Gods by contemporary artists” (Moscow, «Slava!» Publishing House, 2008. 240 р.). I have made the Introduction about pagan art from the ancient Rus to the XX century and some general Commentaries (including biographical notes about the artists). The book is accompanied by a detailed glossary: 94 entries about the gods represented in the album. One part of the Glossary is written by the Ukranian specialist Dr. Ph. Galyna Lozko and another is done by myself. 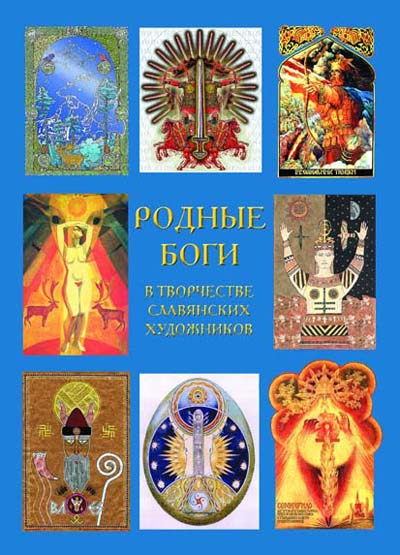 The cover of the album
“Native Gods by contemporary artists”

«The Native Gods» is the first edition to present the collection of reproductions of 230 contemporary Slavic artists’ works dedicated to the ancient Pantheon. These artists are united into a movement by the ideals of our racial archetype and sacred tradition. 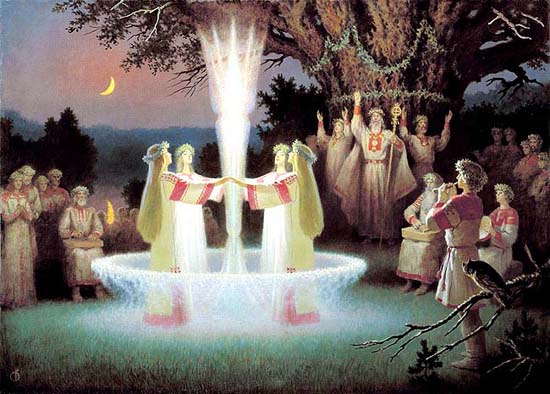 “The Kupala Night” by Boris Olshansky 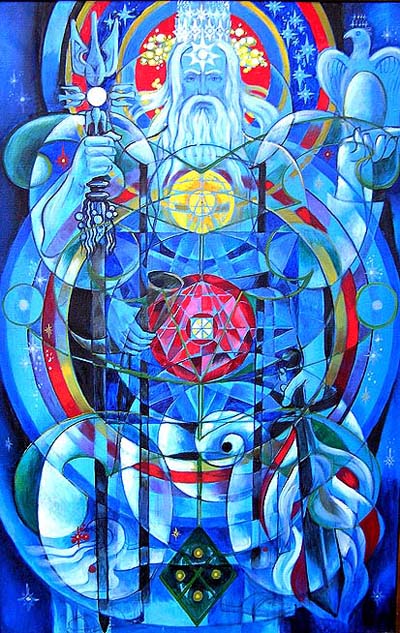 “Heaven the Father” by Victor Prus

I know that this edition is unique, both in terms of factual and aesthetic content. It appeals to a wide circle of connoisseurs of the sacred art all over the world. That’s why I have made some public presentation in Moscow, Saint-Petersburg, Paris etc. https://ateney.ru/albom.htm 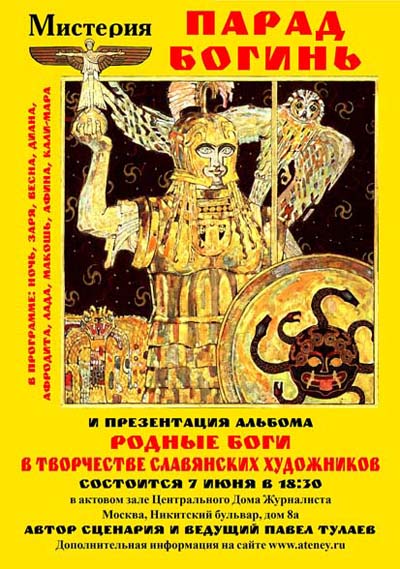 We have also organized exhibitions of the artists of this movement, during which one could see the original art-works and buy photocopies of the works. This Bologne conference of WCER with my little expo is the next step of my mission. https://ateney.ru/Kongress/part1.htm 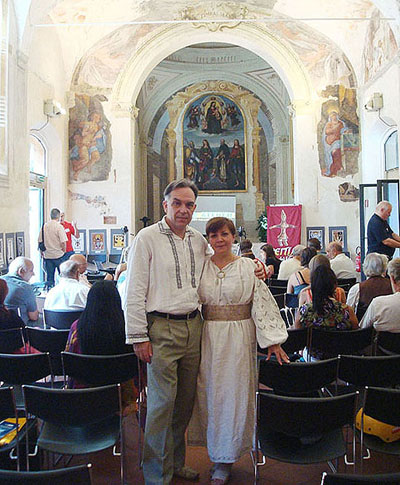 Our project is not limited to gaining publicity or earning money. We represent a new generation of thinkers, a new alternative in aesthetics which is aimed at awaking the archetype of our Race and reconstructing the Aryan principals of being. In the name of our Native Gods! 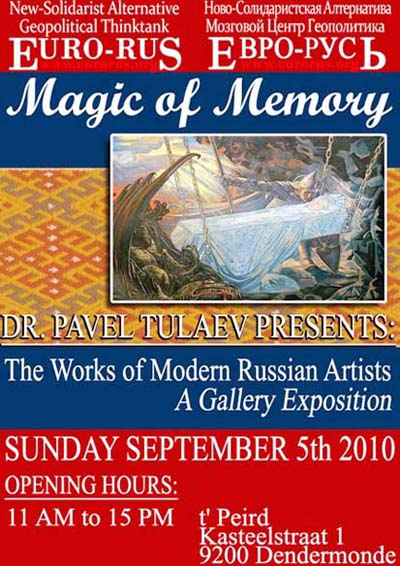